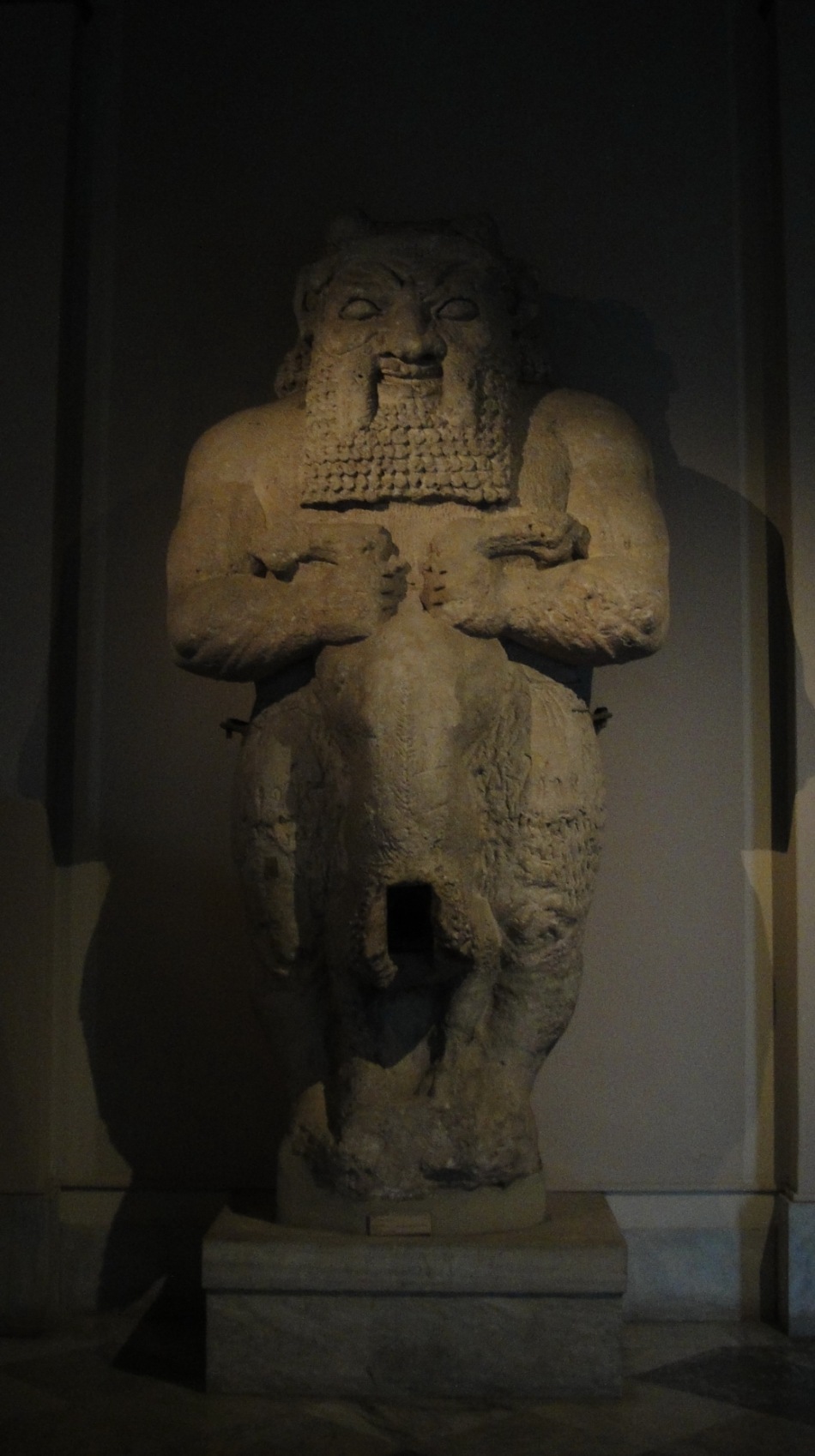 This is a statue of Bes from Amanthus (Cyprus).

Bes (also spelled as Bisu) was an Egyptian deity worshipped in the later periods of dynastic history as a protector of households and in particular mothers and children. In time he would be regarded as the defender of everything good and the enemy of all that is bad. While past studies identified Bes as a Middle Kingdom import from Nubia, some more recent research believes him to be an Egyptian native. Mentions of Bes can be traced to the southern lands of the Old Kingdom; however his cult did not become widespread until well into the New Kingdom.

Modern scholars such as James Romano demonstrated that in its earliest inceptions, Bes was a representation of a lion rearing up on its hind legs.

After the Third Intermediate Period, Bes is often seen as just the head or the face, often worn as amulets. It is theorized that the god Bes came from the Great Lakes Region of Africa, coming from the Twa people (a pygmy group) in Congo or Rwanda. The ancient Twa were about the same height as the depictions of Bes.

Another theory, connected to Bes’s role in both the protection of children and women in labour, is that Bes is the figure of a miscarried fetus. Bes is also known to be wearing a lion skin on his back.

Bes is supposed to be a dwarf — most of statues of Bes are tiny, childsized at most.  This one is gigantic — good 6 meters tall.

My other favorites here are the Kalos — with very Khmer-looking chests; and, of course, the Bull.  Do you have any guesses as to the meaning of this iconography, though (from a 2 c. AD tomb in Sidon):

Diggins from the Necropolis of Sidon fill five gigantic halls at the Istanbul Archeology Museums. A number of styles are represented, including recycled Egyptian sarcophagi, and the quality of carving is extraordinarily high throughout. Here are two more sarcophagi from the same room where the Alexander Sarcophagus stands. 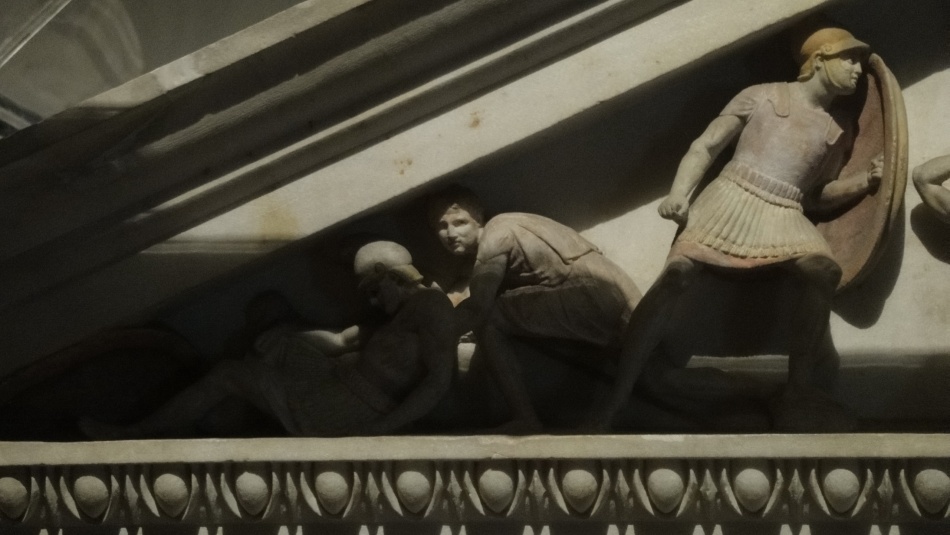 The Alexander Sarcophagus is one of four massive carved sarcophagi, forming two pairs, that were discovered during the excavations conducted by Osman Hamdi Bey at the necropolis near Sidon, Lebanon in 1887. Originally thought to have been the sarcophagus of Abdalonymus (died 311 BC), the king of Sidon appointed by Alexander immediately following the Battle of Issus (333), it was demonstrated convincingly by Karl Schefold to have been made before Abdalonymus’s death, its still-classical manner uninfluenced by the style of Lysippos. Some scholars now believe the sarcophagus was made for Mazaeus, a Persian noble and governor of Babylon. Six Ionian sculptors’ hands have been distinguished, working in an Attic idiom, most probably in Sidon.  It now rests behind glass at the Istanbul Archeology Museums.  The quality, accuracy and detail of the carving is absolutely incredible and unmatched by any antique tomb I have seen anywhere.  The sarcophagus was once painted — traces of paint can be clearly seen in several paces — and must have looked a lot like the decor of a South Indian temple.

Here are the eleven so-called Abukir medals now at the Gulbenkian Museum in Libson. They have many claims to extra-ordinarity: the story of their finding is a bit of an orientalist mystery (a la Conan-Doyle: dubiously colorful oriental gentlemen arrive in Paris with a crazy tale of a treasure dug up in the desert sand; on account of their being dubiously colorful and oriental, no one wants to buy their wares except… another Oriental gentleman), we have no clue as to their purpose, they are the only such set surviving (though others have once existed and we do have their fragments), they are technically incredibly attained, as any cursory comparison with the Renaissance medals in the same museum shows, despite the relatively low technological level of metallurgy in Roman times, their iconography is mysterious (it is not clear how all the images hang together), and some of the medals represent novel treatment (such as the fellow seen enface from somewhat below). Above all, they are very beautiful and (like everything else in this museum) very beautifully displayed.

The guides tell you blithely that they are ancient Olympic medals. Here lies a huge problem: there is no downside risk for bullshitting. Should there be a penalty for people in teaching positions spreading minsinformation? Nothing too severe: cutting off a pinky for something minor like this. 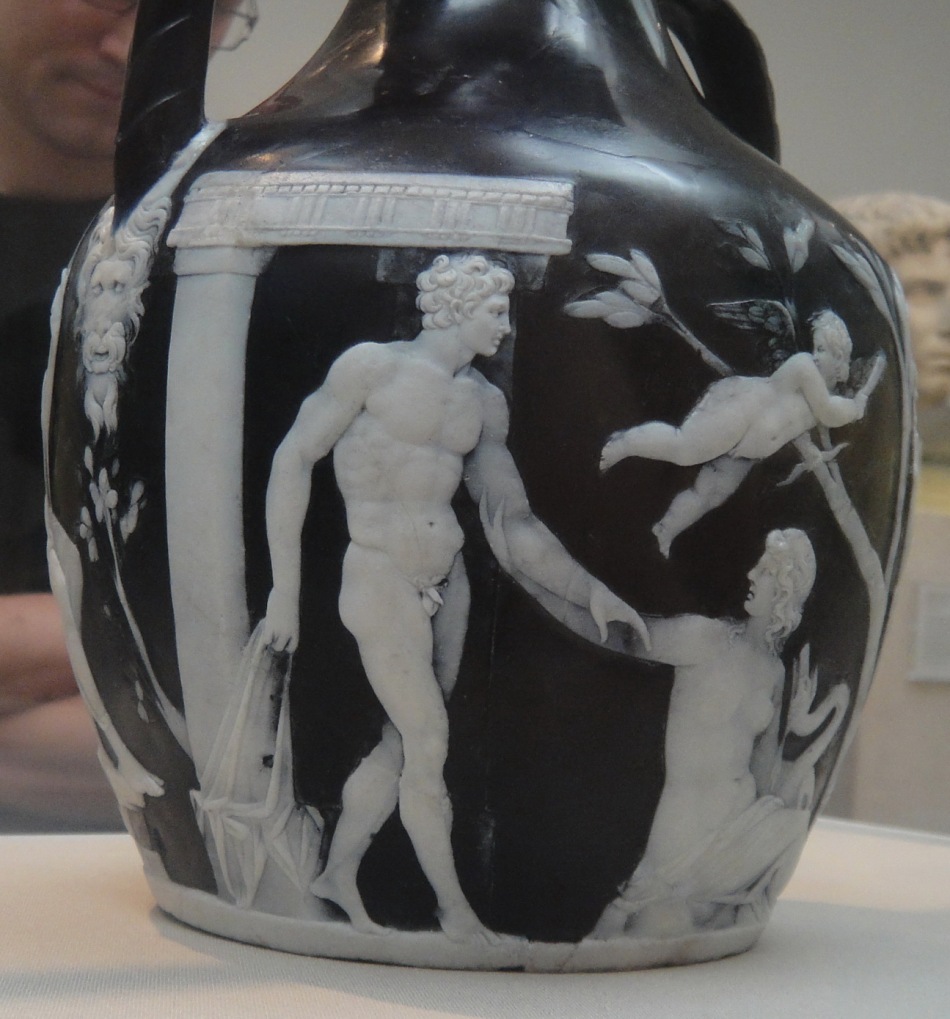 A piece of virtuouso Roman glass cameo, unmatched by modern efforts to reproduce it (the Northwood vase at the Corning cracked in firing); recorded since 16th century; father to Wedgwood’s Jasperware; it passed through the hands of William Hamilton; and made him a fortune which — probably only partially — made up for the loss of his collection at sea. Etc. Read about it here.

More Athenians have been spotted at the British Museum

Surely, these photos are the least satisfactory I have ever posted anywhere. The reflective glass aside, camera’s single lens is simply an inappropriate instrument with which to view figure-decorated pottery. The human eye — because there are two of them a few inches apart — sees more of the decoration at any time. Take for instance the alabastron below: it’s about 8 inches high and when you view it, you see probably something like 160 degrees around its surface; while the camera sees less than 90. Similar problems arise with amphorae where part of the decoration lies above the fold: photos can show us either the lower part, or the upper part, never both. When viewing the real thing, we suffer from similar limitations and end up craning our necks, but somehow, our brain corrects for the movement of the head and we have the impression of apprehending the whole picture.

Makes one wonder how the clever Chinese knew to avoid, by and large, large figure decoration on their ceramics.

This amphora is easily one of the most beautiful potted jars I have ever seen. The quality of the potting must have made an impression on the potter himself — one Androkides — because he signed it. It is thought to have been painted by one Psiax (one hell of a name to live down in elementary, I should imagine) and was found… in the once Etruscan town of Vulci.

Which is why my archeologists-ancestor’s contemporaries thought all this stuff to be Etruscan.

Several vases potted by Andokides survive — as well as a shard found in Acropolis which suggests that he was one of several sponsors of a bronze statue there: his potting made him rich as well as famous.

Made presumably in Taranto, perhaps around 200-300 BC. She’s about 5 inches across.

The British Museum: Mausoleum, or, what’s left of it

It was once one of the seven wonders of the world: a monument built by Artemisia, sister-widow of king Maussollos, in his honor. (On account of which filial act, she was reborn in the Renaissance as one of several great queens of antiquity). It survived well into the middle ages, we are told, until an earthquake toppled it, making it free game for anyone in need of building stone. Bits were incorporated into the castle of St Peter, built by Knights of St. John (later, “of Malta”), in what is today Bodrum, Turkey. In the nineteenth century, they were dug up by the British consul and brought here. Sic transit, etc.

The topic of the freeze is feminist — er… malist? —  Greeks fighting Amazons.  The Greeks appear to be winning (in one of the more damaged panels below, Heracles is shown clubbing to death the kneeling Hyppolite, queen of Amazons; very unchivalrous of him, if you ask me) — but, for the moment, the ladies appear to be dealing back as well as they receive. With reason: Hyppolite was said to be an ancestress of Maussollos; and Labraunda, just a little in-land from Helikarnassos, was considered a sacred site by both Lycians and Karians: the sacred labrys — the two-headed axe of Hyppolite, featured on many Karian coins — was housed and venerated there.

As for the horse – it’s from another part of the Mausoleum, though, really, does anyone know which?