A tale of two documentaries

The Paris Opera Ballet documentary Tout pres des etoiles packs a lot of content into its very slim 90 minutes: the strict, hierarchical organization of the school and the ballet company; its vast resources and extensive state budget (about 45 million euros then); its phenomenal commercial success (90% frequency throughout the year); the life of the dancers, who typically dance from the age of nine, having from that age on no more than two hours a day of play to themselves; and who grow up befriending and dancing all day with their deadliest competitors (each year only 1/10th advance to the next grade); why they chose the profession (one: “I chose to dance because I could not speak”, another: “I wanted a monastic kind of life, one with total commitment to a cause and nothing of the dreariness of normal life”); how they feel about it (“Love is too impotent a word to describe how I feel about dance”); how they struggle with their bodies – their aching backs and bleeding feet (“when you dance, you forget”); how they retire at 40 (women) or 45 (men) physical wrecks, their body collapsing whole centimeters of height, wracked with arthritis; how they feel about their teachers (“I owe everything I am to him”) and their students (“I am childless, but in the last 20 years have had 135 children of my own — my pupils”) without spoiling them (“it’s tough to hear honest criticism when you are ten or twelve”); how the possibility of being on stage for a few minutes elicits not just desire but… ravenous hunger; how their professional life preempts their personal life, indeed often makes one impossible; and how it is forever balanced on edge – one accident and they are a nobody, essentially unskilled, unqualified for any other job.

And more: angelic faces – some from Bronzino: 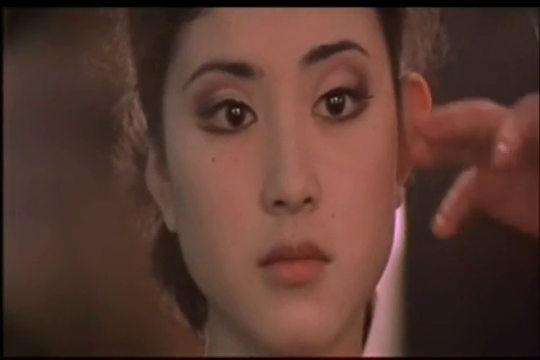 (La Maison — the company — is perhaps the last openly beautist organization on earth) and dance sequences of mind-boggling beauty — which I can’t easily post here:  you can watch the whole thing here.

Etoiles was known to Wiseman when he set out to produce La Danse. Yet, nearly none of the above is to be found his documentary. Nor anything much else, really: the man went in to investigate – he enjoyed unprecedented access to the company and her dancers — and found… nothing. Why did he make his film? Normally, a new film or a new academic study on an old subject is undertaken when the extant work is seen to be insufficient and the authors feel they had something to add to the topic. Wiseman didn’t add whit. Perhaps it’s just business, a marketing term called channel stuffing: he has a sales channel (the PBS who, for lack of good material, knee-jerk buy everything he makes) and produces a work every year to stuff down that channel:  the business equivalent of ringing your ATM. A critic said of Wiseman’s film:  what do you expect from a man who normally makes documentaries about water companies and high schools? whereby he meant to say ballet is a class apart.  But  I fear the critic’s evaluation may be too hopeful:  given his performance in the case of the POB, I suspect Wiseman probably misses the really interesting things about water companies and high schools, too: a case of going into the forest, and missing both it and the trees.

What is it like to be a dancer at the Paris Opera?

What is it like to be a dancer at the Paris Opera?  To have worked with and looked at — ever since one’s teenage years (the usual admission is around 16) — at these beautifully proportioned, graceful, athletic people every day, all day, twelve, fourteen, eighteen hours a day (until recently the ballet school had a boarding requirement); and at oneself in the mirrors of the practice studio, constantly adjusting one’s pose and gesture so that they look the most beautiful they possibly can, usually at the cost of painful effort, forceful overcoming of the body’s resistance to the commandments of perfection; at oneself, who is at once the artist and the object of one’s art; and then stepping out and realizing just how…  unlike one the rest of the world is?

What is it like, for these people, to step out into the real world — walk into a supermarket, say, to pick up a bottle of milk (what else?) — and suddenly see flabby fatsoes gracelessly lumbering their overfilled shopping carts down the cluttered aisles, towards the cash registers where toothy, blank-eyed cash-register girls are being ineptly chatted up by gangly boys with bad skin?

How do we even begin to conceptualize what it is like to be a dancer at the Paris Opera?

What is it like to be an angel fallen to earth — thrown down by his buddies in a dicing brawl upstairs — and wake up amongst us mortals?  Does one  mistake the world for a muddy farm and us for its produce, lifeless animal-feed vegetables, some kind if sour corn, indifferently shaped, carelessly heaped into piles amongst the dirt and the puddles?